Muskoka’s boating season is almost over. We all are familiar with the term “Four Seasons”. However in Muskoka we have other descriptors, such as “boating season”, which has different meanings for different people. Some people boat from May until October and others keep boating until the lake starts to freeze. In the photo below, taken at the foot of Stills Bay on Lake Joseph on November 25, 2012,  you only see One Boat. Earlier in the boating season the docks were full and now there is only one boat left. The docks in the photo are owned and used by Lake Joseph Islanders.  During the summer the docks were full and by last week there were a only few boats, one of which was the Foots Bay Fire Department boat however, now that the snow and cold weather have arrived and most of the cottagers have left for the season, even the Foots Bay Fire Boat has been retired for another SEASON. 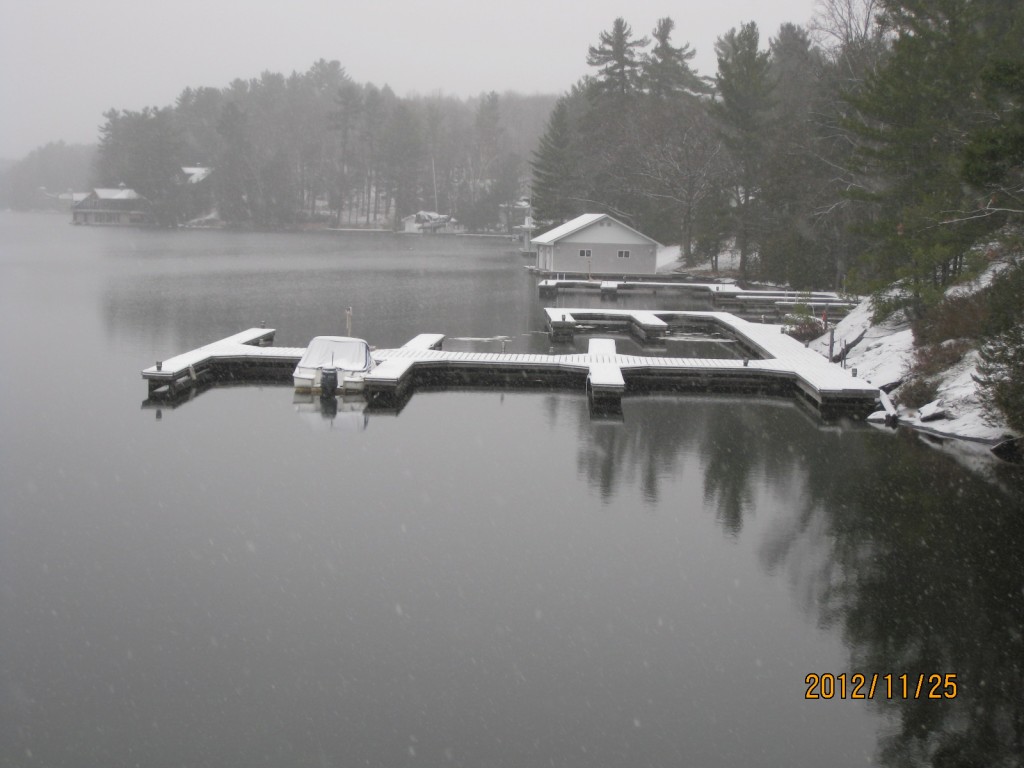 I don’t know who the last boat belongs to, but to be certain they are serious about extending the boating season for a few more days or weeks depending on what Mother Nature sends our way.
In our family, one of the boats stays in the water until it the very last day before the water literally turns into ice. Many of the Island clients expect and insist that they can have access and service to their Island properties until just before the ice forms. As soon as the lakes freeze over, the silence descends. Once boating is no longer practical there is a period of time when lake travel is “in limbo”. Until enough ice forms and then lake travel becomes ice travel across lakes which provide a New Season in cottage country.
So for our Muskoka lakes, as far as travel is concerned, we only have two seasons…Boating and Ice Travel. Once the ice is safe we see travel by snowmobile, ATV, cross-country skis, walking and later once the ice is thicker we even see travel across the ice by car and truck.