The first question we get asked by real estate buyers and sellers is “how is the market?”
Cottage buying and selling follows a yearly cycle which parallels the 7 month boating season (April to October). The majority of our activity occurs in this time even though there are a few sales in the other 5 months of the year. To provide a factual answer to the how is the market question we start with the number of sales 2012 compared to 2011. 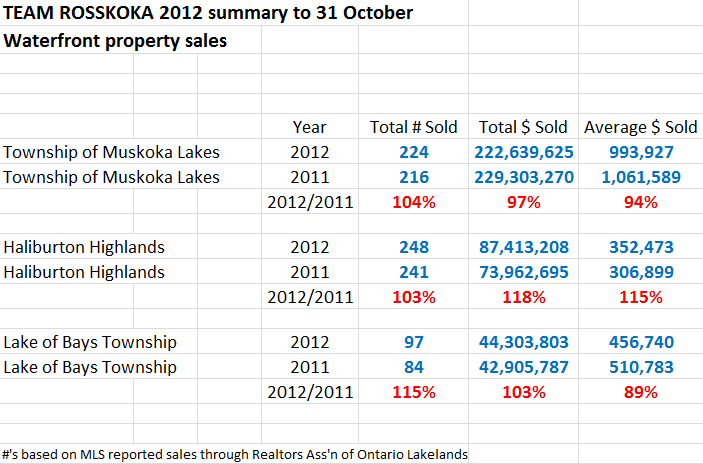 The Waterfront Sales Summary 2012 to 31 Oct shows what happened in three different geographical areas of cottage country. In all three areas the number of sales was up between 3 and 15%. The total dollars spent was down 3% in the Township of Muskoka Lakes, up by 3% in Lake of Bays Township and up strongly by 18% in Haliburton Highlands. Another statistic often quoted is the average selling price. Well, it was up by 15% in Haliburton Highlands, down 6% in the Township of Muskoka Lakes and down by 11% in Lake of Bays Township.
The year isn’t over but the majority of the sales for 2012 have already happened. All in all, what does this mean? 2012 had more sales and prices were up in some areas and down in others. The waterfront cottage market fared better in 2012 compared to 2011.
What do we expect in 2013? This is where you need a crystal ball. The demand to buy is strong and expected to continue that way. Sellers will only be successful if their asking price is seen to be “good value” compared to the marketplace. Properties priced too high will continue to sit on the market unsold for season after season.
If you are interested in a particular lake or neighbourhood in Muskoka, send us a note and we will be pleased to investigate the local market for you.